In the second part of our series on Global Warming & Climate Action, we look at the impact of our actions on the climate.

Before humanity started burning fossil fuels on a grand scale, anthropogenic greenhouse gas emissions were primarily caused by wood burning, deforestation for agriculture, and the cultivation of methane-producing crops and animals.  Since these emissions arose from small-scale interference with contemporary biomass, the effect remained comparatively small, akin to the effect of a bad global season of wildfires.  With the systematic exploitation of fossil fuels, humanity gained the ability to unlock the solar energy stored in ancient biomass while releasing long-buried carbon into the atmosphere as a byproduct.  The energy from fossil fuels powered the industrial and technological revolutions and within 250 years of lighting the hydrocarbon candle, humankind set foot on the moon.

It is estimated that from the 1750s, humanity has emitted 1,400 billion metric tons of carbon dioxide from fossil fuels, which is equivalent to the total output of 2,800 years of global volcanic activity.  As shown in Figure 4, the vast majority of this was emitted after 1950. 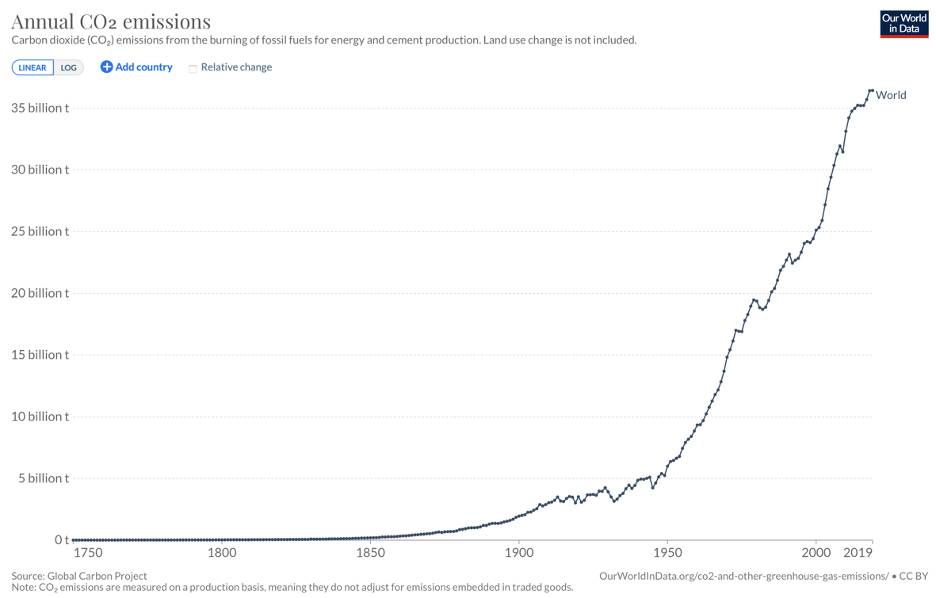 Since global mass and energy flows are complex and closely interlinked with other cycles in the ecosystem, there has been a lot of debate concerning the “significance” and “true impact” of anthropogenic emissions on the global climate.  However, the long-term record of atmospheric concentrations of carbon dioxide and methane in Figure 5 and Figure 6 speak for themselves.

The long-term concentration trends were radically broken shortly after humanity lit the hydrocarbon candle.  It seems exceedingly unlikely that this is a mere coincidence.  As seen in Part 1, more greenhouse gas in the atmosphere means longer residence times for infrared photons, and this translates to higher average surface temperatures.  Because physics.