In this Part, we are looking at anthropogenic greenhouse gas emissions in more detail. We will learn about the main sources of these emissions to prepare a framework in which to evaluate proposed climate actions.

The Global Warming Potential of a greenhouse gas over a 100-year period (GWP100) depends on the size and position of its absorption spectrum and on how long it stays in the atmosphere.

For convenience, quantities of greenhouse gases other than CO2 are expressed in “CO2 equivalent” units (CO2e) by multiplying their mass by their GWP100 relative to that of CO2.

By this calculation, the emission of 1 ton of SF6 gas (which is used to insulate high-voltage switchgear for example) equals 22,800 tons CO2e.

The equivalent units are useful as bookkeeping tools, but they are not very precise; for example, they underestimate the short-term impact of Methane (GWP20 = 84), as well as the long-term impact of Industrial F-gases.  Different sources may also quote different GWP; however, these differences are slight and remain within the same order of magnitude.

In what follows, “billion tons” will be expressed as Gigatons (Gt), so “1 billion ton of CO2e” will be written as “1 GtCO2e”.

Human activities today release about 50 GtCO2e of greenhouse gases per year, including ±35 GtCO2.  In the 1950s, humanity released ±6 GtCO2 per annum; therefore, since the 1950s, the world population has tripled while its CO2 emissions went up 6-fold.  By comparison, the main natural mechanism for atmospheric CO2renewal, global volcanic activity, releases about 0.5 GtCO2 each year.

Figure 15 shows how the main economic sectors and activities contribute to the type and quantity of greenhouse gas emitted (as a portion of total emitted GtCO2e). 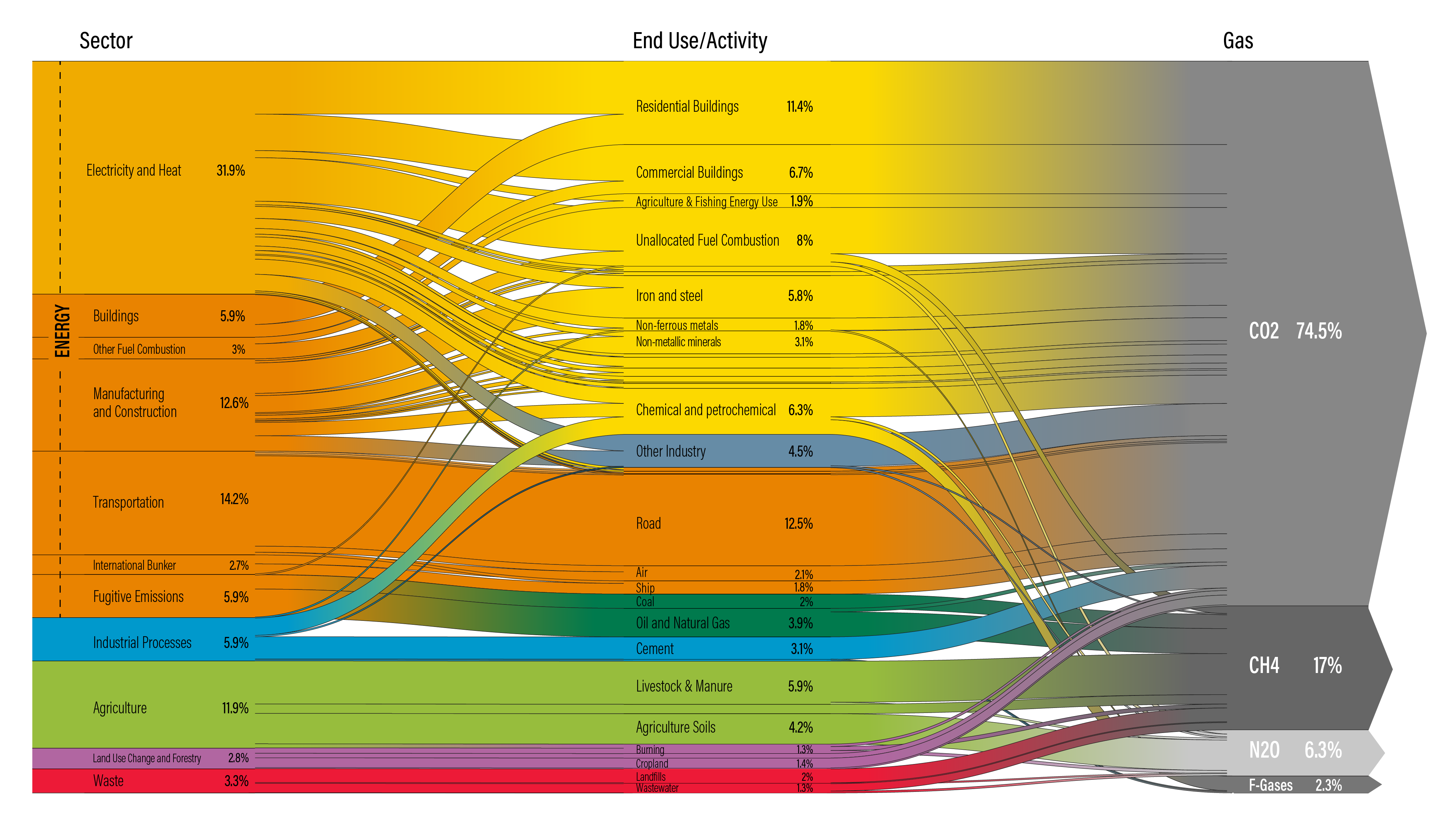 The single largest contributor to global emissions is the Power Sector, which burns coal and gas to generate electricity. According to the IEA World Energy Outlook, in 2019 the Power Sector emitted about 13.5 GtCO2, which was ±40% of all anthropogenic CO2 emitted, or ±28% of all greenhouse gas emissions that year.

According to Carbon Brief, nearly 10 GtCO2 was emitted by coal-fired power generation plants that year, about half of which in China.  As can be seen in Figure 16, this is not likely to change in the near future.

The next largest contributor to global emissions is the Transport Sector, which burns refined oil products in vehicles of all kinds.  In 2018, the transport sector emitted 8 GtCO2 or about 24% of all CO2 emitted that year, or 17% of total anthropogenic greenhouse gas emissions.

As shown in Figure 18, the emissions are split about equally between the transport of people and goods. The largest country contributions to Transport emissions were from the United States (21%), China (11%), and India (4%).

Another way to parse the emissions data is shown in Figure 19, which displays the share of total greenhouse gas emissions down to as many as three levels of human activity. 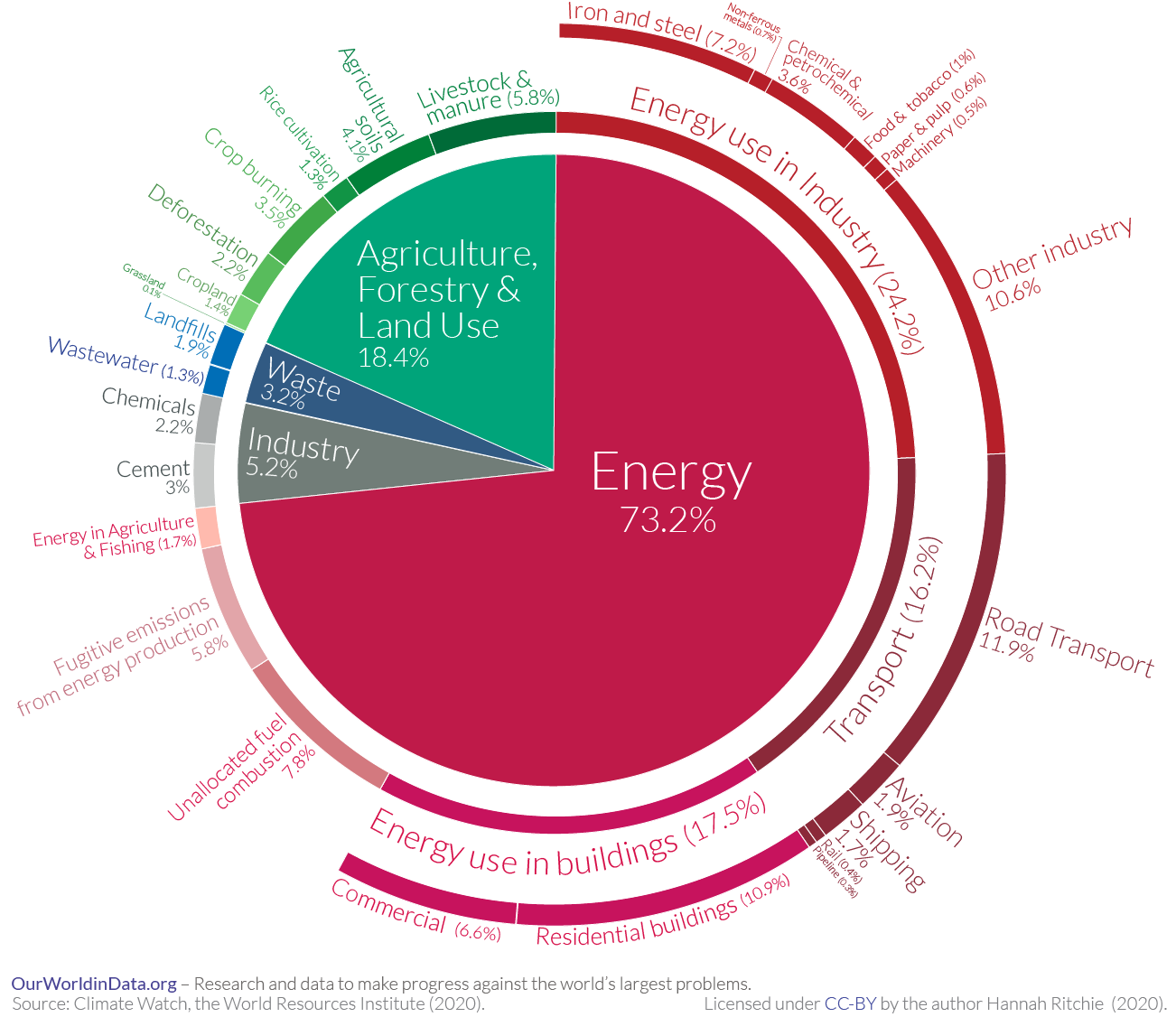 After the Energy Mega-sector, which includes (amongst others) the Power and Transportation Sectors discussed earlier, the biggest contributing Sector is Agriculture, Forestry, and Land Use, which emits about 18% (9 GtCO2e) of all anthropogenic greenhouse gases, mostly in the form of Methane and Nitrous Oxide.  This is not a small sector; the global warming impact of the emissions from Livestock and Manure subsector on its own are greater than those from the third largest Sector, Industry (Cement and Chemicals production).

The picture of anthropogenic greenhouse gas emissions is as complex as the fabric of human activities that cause them.  In consequence, data is not always available, or not always consistent between sources; however, in general discrepancies tend stay within the same order of magnitude of the effect and do not take away from the main picture that emerges.

Every additional ton of anthropogenic emissions is one too many and time is of the essence to curb and mitigate the global warming to come.